There’s no doubt that humans have meddled with nature for far too long. The list of endangered or extinct species of flora and fauna is increasing - and at the rate in which the world’s forests are being destroyed in the name of profit and desire is frankly depressing.

In order to solve these problems that are contributing to climate change, it’s vital that we take a deep look at and understand what fixes we can make. Reforestation and rewilding have been gaining popularity recently, as they are two impactful solutions to these issues. However, the two terms are often used interchangeably and the nuances between them are not that well known. So, let’s take a deeper look:

The difference between reforestation and rewilding is much less complicated than it might seem at first. In simple terms, according to Mossy Earth (a social enterprise involved in both projects):

A quick visit on their website will easily show you some differences in reforestation projects vs rewilding projects. As an example, planting trees in the great Caledonian Forest in Scotland is one of their reforestation projects, and removing toxic waste in Croatian caves, to help unique creatures of the underworld, is one of their rewilding projects. Let’s break down some differences in characteristics: 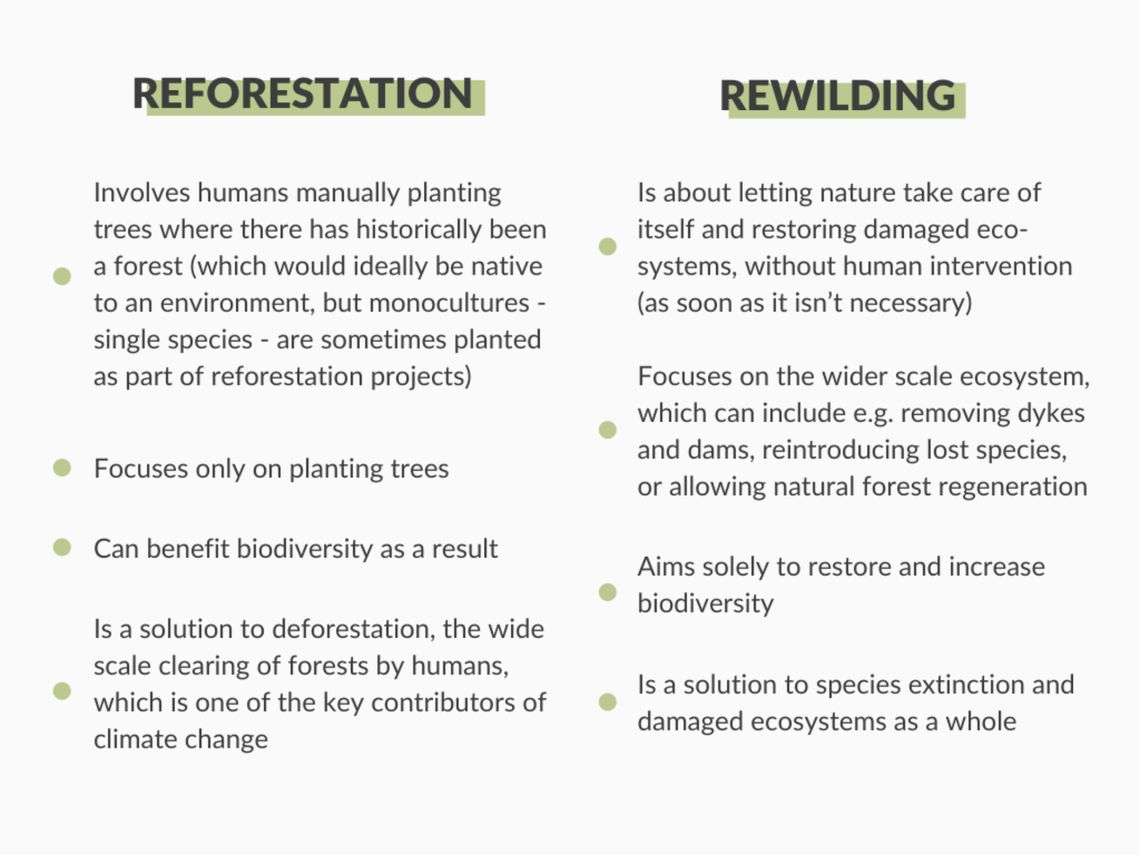 Now, let’s look at some of the suggested pros and cons of both, while remembering that it is still relatively early days for both approaches:

Rewilding vs. reforestation: which one is better?

Both reforestation and rewilding have promising potential for climate change mitigation. Some believe that rewilding is a better solution, and that instead of reforestation, natural regeneration without any human intervention to plant trees would be better. That said, considering that we are in a climate crisis, and natural regeneration isn’t happening fast enough, we should take advantage of the best available options. Both solutions can and do intertwine with each other, as reforestation contributes to restoring biodiversity, as long as native and diverse tree species are planted.

How is POMP involved in reforestation and rewilding, and how can you get involved too?

We’ve recently subscribed to a membership program previously mentioned in this article called Mossy Earth that aims to restore nature and fight climate change. We use profits from our #ShowYourStripes clothing range to fund this membership. So, if you want to get involved too, you can check it out and purchase an article of clothing you love (such as this climate change hoodie in GOTS-certified organic cotton, perhaps) and you’ll indirectly be helping! And if you want to go the extra mile, you can set up a membership with Mossy Earth yourself directly on their website.